The last two and a half days have been consumed by our first-pass olive harvest for 2019. It was a success but it was a lot of hard work.

On Wednesday I acquired a truck from Enterprise and got all the harvest equipment staged – rakes, nets, sorting stations, and bins. That was the half day; not big deal.

On Thursday three hired helpers and I picked olives while Kathryn and our friend Caroline sorted out leaves and bad olives. We worked steadily for eight hours and picked about 750 pounds before sorting (660 pounds after sorting), filling 3/4 of what’s called a macrobin. It wasn’t as much as I had hoped but it was all we could do. 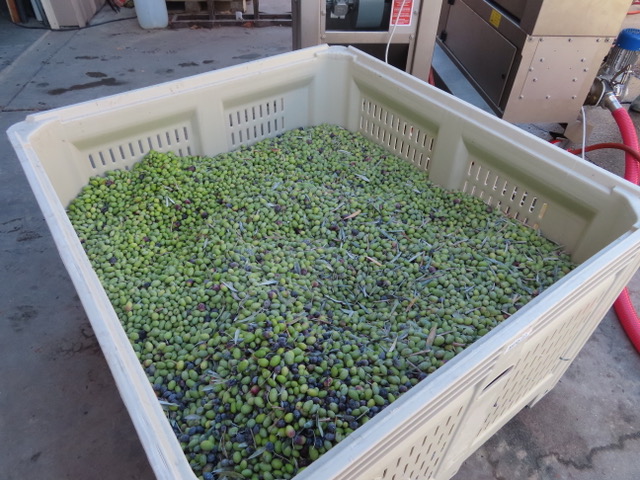 Picking is reasonably hard work, even with nets and rakes. You position the nets on the hillside, nestled up against the tree trunks. Then you attack the olives with rakes, making it rain olives onto the nets. When either the trees are stripped or you’ve got almost too much to carry, you roll the nets up and hoist the olives to the sorting stations. Then you do it all again. And again.

For a young person I think it’s light work, and my hired guys seemed to think so. But for a 63 year old, scrambling around the hillside and carrying heavy loads takes its toll. I was and am very, very sore.

The sorting is also hard work, but more from the repetitive and monotonous nature of it. It’s assembly line work. It’s basically quality assurance – you can mill the olives with damaged/bitten olives and with lots of leaves, but the end product will suffer. It won’t taste as good.

At the end of the harvest day we celebrated with some good wine (probably a bit too much) and some Mexican food. The next morning we took our olives to the be milled at Cougar Vineyards in Temecula. The owners at Cougar are great people and grow olives in addition to Italian grapes, and I’ve struck up a deal to process our olives using his milling equipment. (BTW, their wines are superb. If you live in Socal you should visit them.)

We had some technical problems that took up the first couple of hours. An electrical problem kept the mill from starting at all, then a mechanical problem kept us from operating continuously. Rick the winewaker, one of his helpers, a technical rep from the manufacturer (by phone) and I all worked through those problems. Finally, we got the cantankerous equipment working.

After about five hours of milling, our 660 pounds of olives yielded 10 gallons of oil, which turns out to be 11.5% oil content. That’s a little low – we should get 15-18% oil from our olives. But we kind of expected that – the longer the fruit stays on the tree, the higher the oil content, and an October harvest is fairly early.

Another side effect of an early harvest is that the oil will have a sharp, somewhat bitter flavor. That flavor does mellow out on its own in a few weeks, but the freshly-milled oil is a little harsh. One treatment for that is filtering, which we may try this year. Rick at Cougar thinks that’s a helpful process, so we’ll see.

All in all, a hard couple of days but a success. I don’t know how many more such days I’ve got in me, but we’ll need at least 2-3 more to harvest the bumper crop we’ve got this year. Next harvest days will probably be right after Thanksgiving.

Letters From An American