I recently passed the first anniversary of my last day at a full-time job. So it’s been a year “livin’ the dream”, as I’ve heard it described. While it’s not strictly related to our traveling life, it’s worth noting and ruminating upon.

Sidebar: I love that word, “ruminate”. It’s one of those words that sounds and feels exactly like its definition. Though use of such words leaves one open to this criticism – “I hate it when people use big words just to make themselves sound perspicacious.”

But back to the topic at hand. Retirement. The first three months were difficult for me and by association for K. My moods and emotions took huge swings, from giddy to panicked. It was a weird time.

The second three months were tough due to extenuating circumstances. We lost two dogs in a short period which affected us both deeply. We flirted with depression and were both angry about the cosmic injustice of it all.

The second half of my retirement year things began to take a turn for the better. We decided to shake ourselves out of our negativity by traveling. In short order we went to Hawaii, Kentucky (twice), the Borrego desert, the San Bernadino mountains, Malibu and Alaska. During this flurry of travel K bought her mobile she-shed, the retro camper. And a new Jeep to tow it.

That six months of frenetic travel seems to have worked. One year after my last day “at work” I’m as happy as I’ve ever been and I believe K is also. We’re both now used to being together a LOT, after years of only seeing each other in the evenings and weekends. We’re both writing – me for the first time, and her picking up where she left 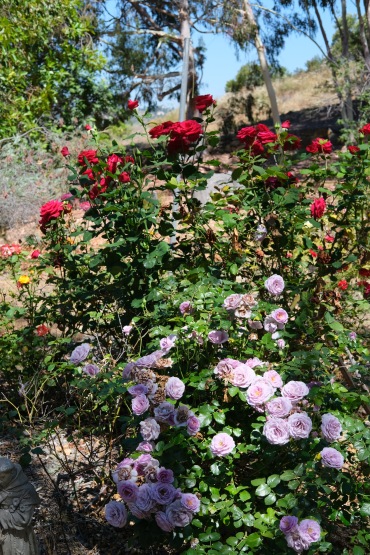 off a few months ago. And I’m actually crazy busy, with board-member work for two organizations, a tiny bit of consulting, taking care of our long-neglected property, traveling and just deciding every day what I want to do. I am, as they say, taking time to smell the roses.

My goal for the next year of “livin’ the dream” is to avoid last year’s roller coaster. Still travel but less intensely. Lose some weight (the eternal goal) and get a little healthier. Finish a novel. Spend even more time with family. Have a great olive harvest.

In short, take the time to do the things that make us happy. That sounds doable.

(Credit to my great friend Chris for the setting on the sunset photo at top of this post. The view from his kitchen is pretty amazing.)