After our beloved dog Bodie passed away (a little over two months ago now), we decided to get away and do some healing. That thought led us inevitably to Kauai, where the pace is slow, the scenery beautiful and the general vibe of the whole island is “relax”. So with a little help from Costco Travel and Southwest’s new Hawaiian island service, we made last minute reservations and were on our way. (BTW, Hawaiian is really hard to spell – I got it wrong the first couple of tries.)

Kauai has always been our favorite Hawaiian island, for the reasons listed above and the good memories we have of the place. This time we didn’t stay in Poipu, staying instead near Kapa’a on the eastern shore. It’s a good location – getting to either the north or south shore tourists centers is pretty fast, and there was good

access to the small cities comprising Kauai’s main populations in Kapa’a and Lihue (translation: restaurants). The only real downside of our oceanfront resort’s location was that the surf there generally wasn’t swimmable – the beach there featured a lot of shallow reef/rock, and the surf was quite strong crashing over it. The result was we traveled to Piopu to swim and snorkel.

A sidenote on Costco Travel – this was our first time using them, and in general I would say “highly recommended”. The value was good, the representation of the rooms and resort locations were accurate, and the integration with rental car, resort and air travel services was seamless. It was just what we needed – a simple way to do a reliable, no-stress week-long getaway.

We managed to do a lot in our short week there. We hiked in Waimea canyon area, kayaked and hiked up the Wailua River in Kapa’a, drove most of the way around the entire island, snorkeled and swan in Poipu…we stayed pretty busy. We also managed to eat in a few great spots.

My favorite was one of our last meals there, in which we were driving around in a downpour looking for a decent meal. We wanted to try the lunch at Kenji Burger, a funky little spot where we had a nice quick breakfast (impressively detailed-oriented cooks working right in front of you), but they were closed. After some rain-hampered searching we randomly ended up at Street Burger, and it was sublime. I have to say, if I were opening a restaurant it would pretty much be Street Burger. Great wine list (an absolute rarity in Kauai), equally strong draft beer choices, industrial-chic décor, a bar-centric seating area, some unique menu items (e.g. a broad selection of fresh oysters, raw or grilled) and everything on the menu done extremely well. Their custom wood-fed and fired grill behind the bar seating was a work of art. I could have eaten there every day, and just might when we return.

My other food fave was a local BBQ joint we discovered the first day, Chicken in a Barrel BBQ. They have a location in Kapa’a and another in Waimea – we sampled them both. I 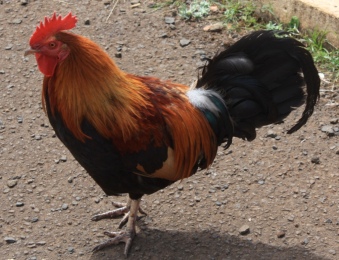 didn’t have much hope for their BBQ; originally dropped in for a draft beer. But everything we tried there was way above average, and their ribs were especially good. Our BBQ visit in Waimea came after a long day driving to the Waimea Canyon overlook (spectacular) and some hiking, and the timing allowed me to see the UK-Wofford NCAA tourney game in real time (UK won easily, even after some speculation that they were giant killers). It was surreal watching UK in a mostly-empty bar at the end of the world in Waimea. Very memorable.

Our trip up the Wailua River, a repeat from a few years ago, was a real adventure. We kayaked about 2 miles upriver, against the current but with the wind. Not too strenuous and very scenic. We then disembarked for the hike to Uluwehi Falls, a very popular though slightly hard to reach tourist spot. The hike there is about 1.5 miles, and it’s normally enjoyable. But there had been a lot of rain, including a big storm the day prior, so the trail was muddy. That doesn’t sound too bad, but it turned

a normally scenic, easy hike into a horrific balancing act through the slickest mud I’ve seen. Not sure what causes this mud to be so slippery (crumbled lava? organics? nanoparticles?), but every step was an invitation to take a header into tree roots or rocks. With my already weak knees, this hike was a real test of patience and focus. The waterfall at the midpoint of the hike was still great, but the knowledge of having to return down the same treacherous trail put a damper on the fun. We managed to make the round trip without a fall (lots of slips and slides), but it wasn’t the idyllic hike I had remembered. 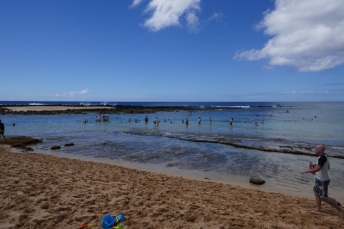 By the end of the week the Kauai trip delivered what we needed. Some R&R, some outdoor activity and adventure, a dose of the Kauai calm energy, and a chance to get away from some troubles. Once again we returned from Kauai with great memories, making it certain we’ll pass that way again.